Rocket Launch: Plan a Visit to Cape Canaveral in Florida 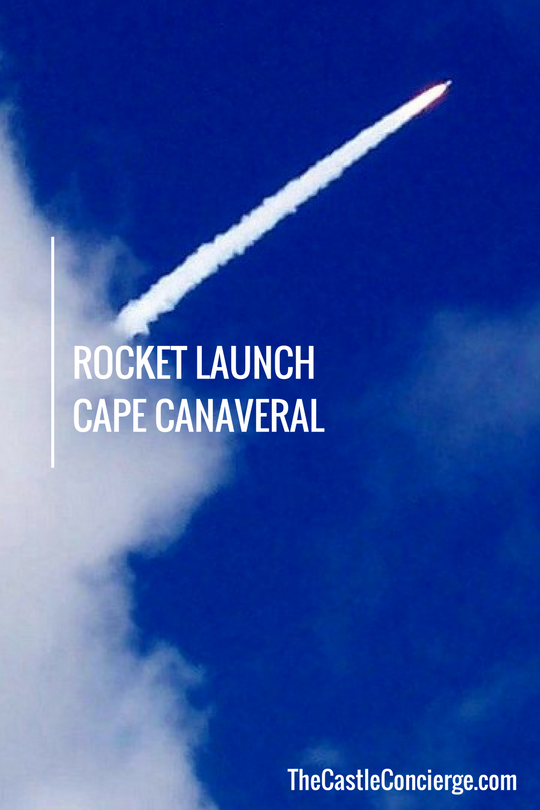 Cape Canaveral, Florida is one of our favorite locations in the United States because it’s home to NASA’s Kennedy Space Center, a cruise ship port, and the beautiful Atlantic ocean. Most recently, we visited for a rocket launch!

We’ve toured the Kennedy Space Center and taken several cruises from Port Canaveral. One of our most memorable trips — a cruise and rocket launch — on the same day! While NASA has launched rockets from the Cape for over sixty years, we’ve only witnessed two of them in person. We’ve tried several times to see more launches, however, timing (work and school), weather (Florida thunderstorms!), and technical issues have interfered.

On January 19, 2006, Michael, Nic, and I embarked on the Disney Cruise Line’s ship, Disney Wonder. We were excited to board the beautiful ship and head out to sea. After boarding, we learned we were in for a special send-off. NASA was launching New Horizons, an interplanetary space probe, with a planned Pluto Fly-by for July 14, 2015!

Instead of heading to our stateroom to settle in, we found a great location up on deck to view the launch. We couldn’t believe our good fortune.

At 2pm, New Horizons lifted off! The fun continued for years. We kept track of New Horizons throughout Nic’s childhood. Finally, when Nic was 15, New Horizons made its historical flight past Pluto.

After several missed launches the past couple of years, we found ourselves at the right place and time for an Atlas V rocket launch. On the morning and afternoon of November 19, 2016, we had a scheduled tour for Nic at Florida Institute of Technology. In the evening, we took the easy drive from Melbourne to Cape Canaveral; still amazed by our good fortune. We found a great parking spot along Nasa Parkway East (a strip of road in the middle of the Banana River) and facing Cape Canaveral Air Force Station’s Launch Complex 41. Looking towards the Vehicle Assembly Building at Kennedy Space Center

Typical of rocketry, we were in for a tense wait. During the hour-long launch window, the timing was pushed back numerous times. When there was one last chance to launch by 6:42pm, the Atlas V finally lit up the sky! Thankfully, it was a successful blast-off of United Alliance’s Atlas V rocket carrying a next-generation weather satellite. And we were there to see it!

Cape Canaveral wasn’t America’s first launch site though. In the 1940s, many of the first U.S. rockets launched from White Sands Missile Range situated in the New Mexico desert. While this desert location is plenty remote, larger rockets required a site that would be less dangerous to the general public. So, on July 24, 1950, Cape Canaveral launched its first rocket over a safer spot — the Atlantic Ocean. Rocket launches can be viewed from many public areas as well as with reserved tickets at Kennedy Space Center.

We hope to watch future launches of the new Space Launch System. And with SpaceX and Blue Origin continuing to bring their rocket launches to the area, the Cape is sure to be an uplifting place to visit!

Have you seen a rocket launch at Cape Canaveral? Share with us in the comments!

In 1982, we traveled to Walt Disney World with our neighbors. We had a small TV that plugged into the car battery. Just as we were checking into Fort Wilderness, we saw the space shuttle take off on the tv. We immediately looked up and saw it above us.

Wow! I regret never seeing the space shuttle. Seeing it from WDW — amazing! Thanks for sharing. I’ll be sure to tell Nic!!

My grandson has had so many wonderful opportunities. He has always had a love for space and now wants to be an aerospace engineer.

It will be fun to follow where his dreams and hard work take him!!

Sailing from Miami on Freedom of the Seas.

Everything is pretty on Kauai.

This website uses cookies to improve your experience while you navigate through the website. Out of these, the cookies that are categorized as necessary are stored on your browser as they are essential for the working of basic functionalities of the website. We also use third-party cookies that help us analyze and understand how you use this website. These cookies will be stored in your browser only with your consent. You also have the option to opt-out of these cookies. But opting out of some of these cookies may affect your browsing experience.
Necessary Always Enabled
Necessary cookies are absolutely essential for the website to function properly. This category only includes cookies that ensures basic functionalities and security features of the website. These cookies do not store any personal information.
Non-necessary
Any cookies that may not be particularly necessary for the website to function and is used specifically to collect user personal data via analytics, ads, other embedded contents are termed as non-necessary cookies. It is mandatory to procure user consent prior to running these cookies on your website.
SAVE & ACCEPT
4
0
Would love your thoughts, please comment.x
()
x
| Reply