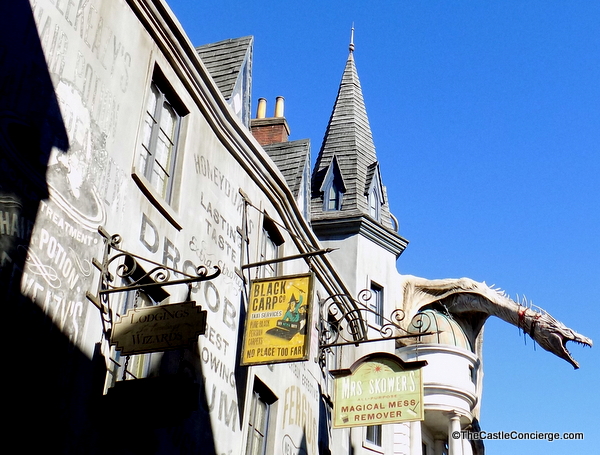 Since the primary purpose of our visit to the Universal Parks and Resorts was to experience Diagon Alley, the first park we toured was Universal Studios Florida.

Lockers – The Less-than-Magical Way to Enter a Thrill Ride

A word of caution when entering several of the attractions at the Universal Parks: be prepared to stow ALL loose items into lockers provided near the entrances to each of those rides.

The lockers are free, but require patience and some finesse to utilize. These lockers are a significant negative aspect to touring the Universal Theme Parks. Frequent Walt Disney World visitors are accustomed to being able to bring bags, backpacks, cinch sacks, cameras, and cell phones onto most attractions as long as they can be “safely stowed” in the provided compartment. At Universal, these items are not allowed on many attractions. 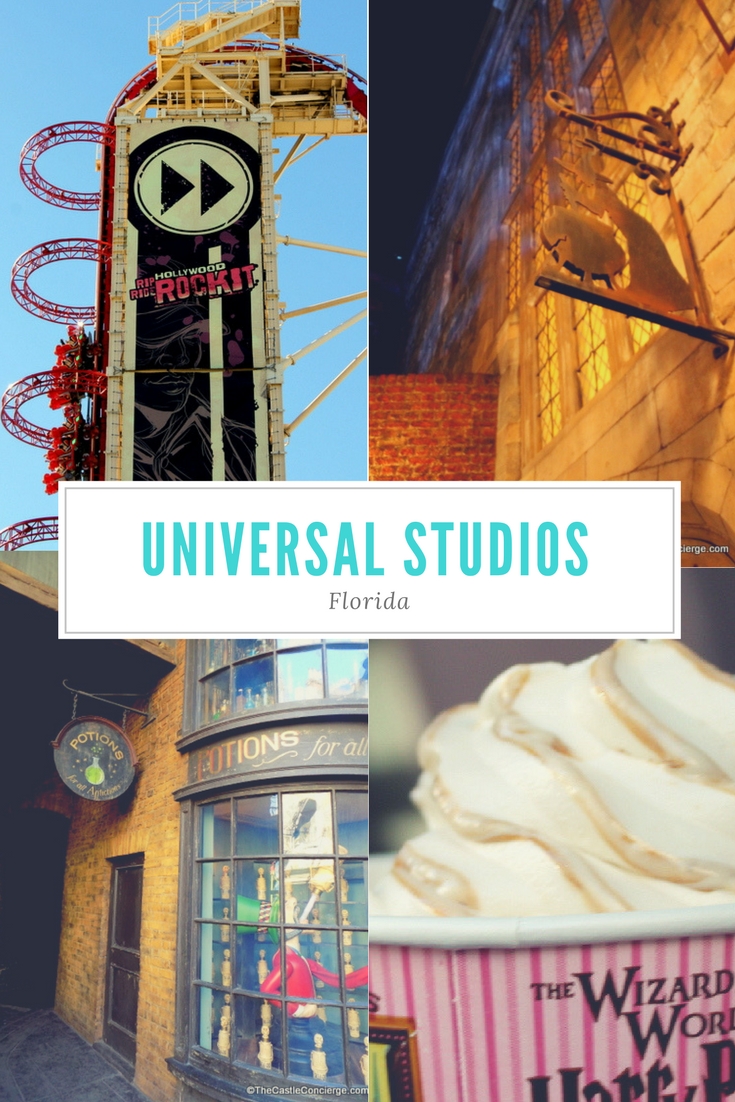 Additionally, be prepared to walk through metal detectors and then “wanded” upon entering several of the coasters. This ensures that any cell phones or other items you might have safely in your pockets are removed and placed in the lockers as well! While the intention of such security and safety precautions are admirable, they are certainly less than magical when trying to have a fun, carefree day within a theme park.

Nicolas and I decided to use our Express Pass immediately to ride the Hollywood Rip Ride Rocket. It’s a well done speed coaster with some significant drops, inversions, and good G’s. The theming is awful, but the ride is good. 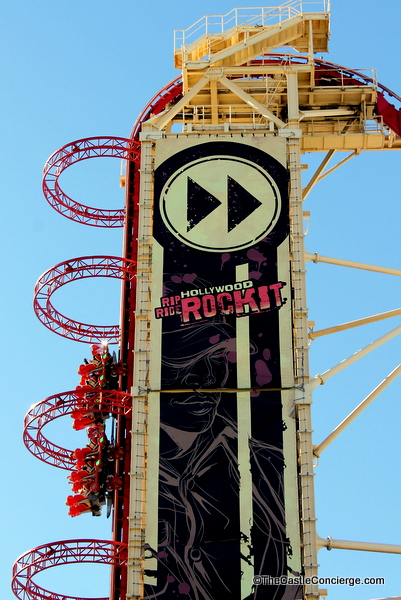 Several attractions in addition to Diagon Alley were either under construction or not present when we last visited. One of those was Transformers: The Ride 3-D. Nicolas and I used our Express Pass once again. We felt this was a really solid attraction, especially if you have seen any of the Transformers movies. As is the case with many Universal attractions, the experience is a creative combination of ride vehicles, simulators, and screens. 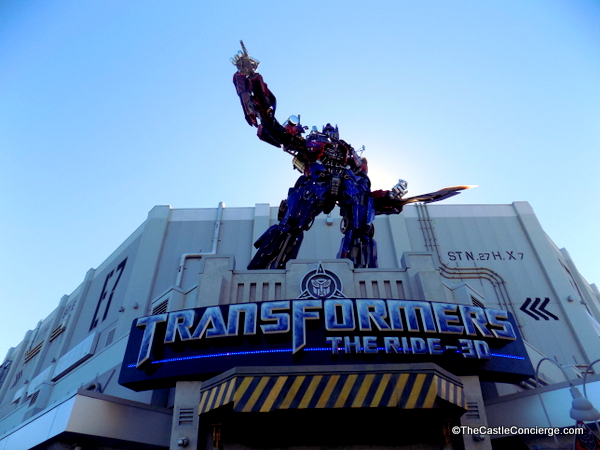 The queue for Transformers: The Ride is really well done, but that is not unusual at Universal. In my opinion, the queues at Universal are significantly more immersive and detailed than most others at Walt Disney World. (Disney’s Animal Kingdom is the one comparable standout at WDW.)

Next stop was the stated purpose of our visit: Diagon Alley.

Any adjectives really can’t do justice to how amazing Diagon Alley really is. It is an astounding and immersive theme park experience that truly transports you into the Wizarding World of Harry Potter. 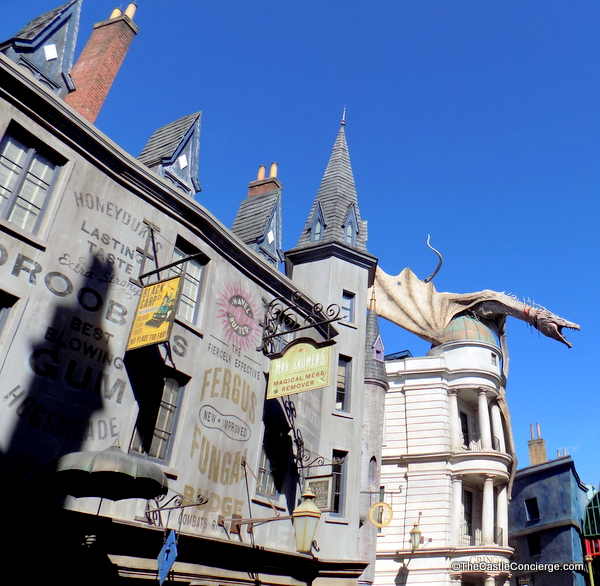 We arrived at Diagon Alley midmorning. As expected, the area was already crowded and the wait time for Harry Potter and the Escape from Gringott’s thrill ride was well over 60 minutes. There is no Express Pass option accepted at this attraction, so arriving early in the morning or riding closer to park closing hours is your best chance of a reduced wait time. 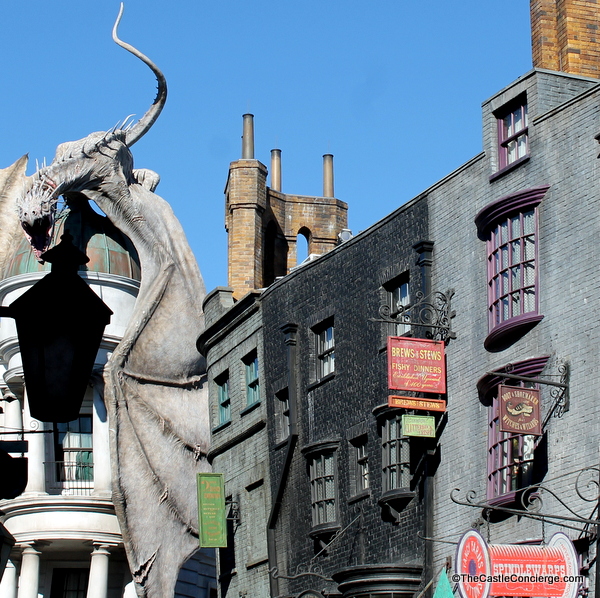 Immerse yourself in Diagon Alley

If the wait time for Gringott’s is too long, go ahead and explore Diagon Alley. It will take some time to discover all the detailed nooks.The Diagon Alley attraction is beyond anything that I have ever seen in a theme park. Universal has taken great care in providing guests with an exceptional experience. It’s a first class attraction on all levels.

At  the outset, you are tasked with actually discovering the Diagon Alley by way of several  “hidden” passages off the London streets represented near the front of the land. 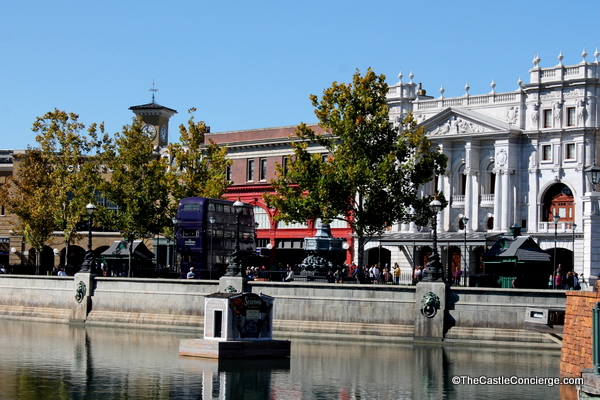 Diagon Alley is hidden behind the London streets

Once inside Diagon Alley, the use of visually stunning architecture and set design makes you feel as if you are indeed a student or professor at Hogwarts in search of Butterbeer, an owl, or a new wand. I was fascinated with the scope of the area itself; Diagon Alley was much larger than any of us had anticipated. Pathways, doorways, and storefronts are all magnificently detailed. For example, the signage and exterior design of the Potions store is spot on. 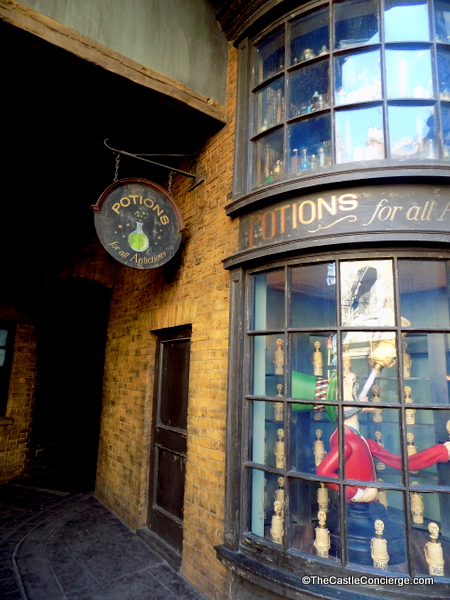 • Purchasing interactive wands at Ollivanders. The interactive wands are marked by a gold label on the box and are not necessarily inexpensive (currently $47.95 each). A map accompanies your wand. Armed with both, you’ll  find locations where your wand is used to cast spells. The spells, if cast correctly, demonstrate surprising and delightful visual and physical effects on a variety of items and objects. This is a really well done aspect to the attraction and worthy of the extra expense.

In one area, a careful wave of your interactive wand conjures up a feather pen that writes mysterious messages on parchment in a storefront window. The spells can be difficult and it takes patience and practice; just like students  at Hogwarts must practice their magic! 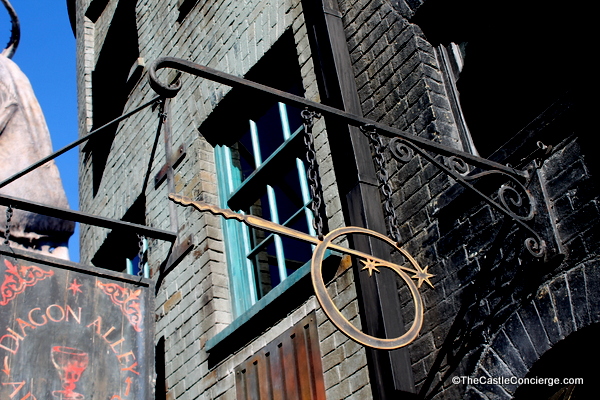 • Enjoying Butterbeer or, even better, Butterbeer ice cream. Butterbeer is an extremely sweet and unique drink that we’ve found in the Universal Parks and at the Harry Potter Studios in London. The Butterbeer ice cream, found at Florean Fortescue’s Ice Cream Parlour, was a delectable treat at 10 in the morning! I loved it. My wife said it was too sweet. 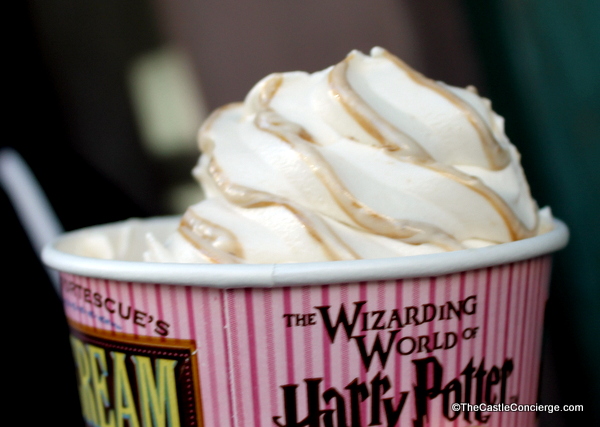 • Exploring the various shops and eateries that are authentic to the Harry Potter films and books. Some of the locations include the Leaky Cauldron, Madam Malkin’s Robes for all Occasions and of course, Quality Quidditch Supplies. During this visit, we invested in wands. I won’t be surprised if we find ourselves donned in robes on our next excursion to Diagon Alley!
• The Gringott’s attraction is a truly remarkable thrill ride experience that complements Universal’s cadre of attractions that combine ride vehicles, live sets, simulators, and 3-D screen technology. We rode this attraction on our second day with very little wait time. This was accomplished by taking advantage of the 1 hour early entry to Diagon Alley provided by staying at Loews Royal Pacific resort.

While exploring Diagon Alley, be prepared to open your wallet or use your debit card frequently. There is Harry Potter merchandise available literally at every turn!

Be sure to experience Diagon Alley both during daylight and at night. The area takes on an intriguing atmosphere in the dark. Specifically, pay attention to the dragon sitting atop of Gringotts Bank.

The Toothsome Chocolate Emporium and Savory Feast Kitchen is a recent addition to Universal’s CityWalk. Conveniently located, take a break and enjoy a different level of creative detail.

A well executed steam punk theme runs throughout the restaurant. The establishment somehow fits in very well with the level of theming inside both of the theme parks, but is refreshingly different at the same time. While the food was well done, it wasn’t exceptional. Creative milkshakes and sundaes are the highlight of the menu. I had the Chocolate Banana Brain Freeze and it was well worth the calories! (Stay tuned for a more in-depth review soon.) 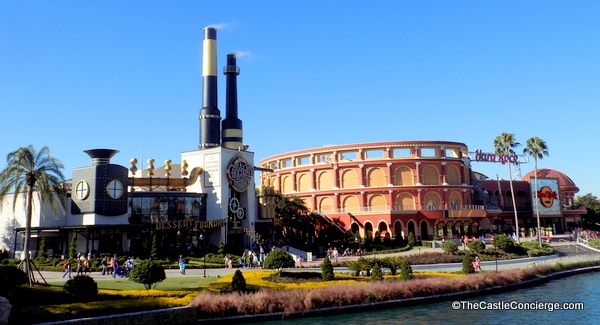 Up Next: Hogwarts Express, Kong, and Raptors

Share your thoughts about Diagon Alley and/or Universal Studios!