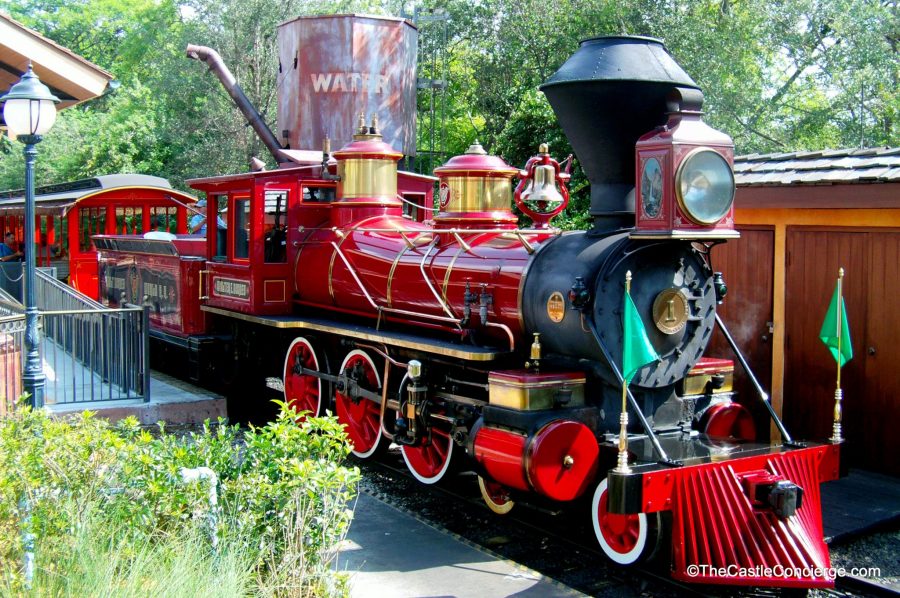 Your Magic Kingdom itinerary is already jam-packed and you’ve got to see princesses, ride a dwarf train, and have lunch inside a Beast’s Castle. Yep, I get it. When you need a filler between waiting in long lines for popular rides or maybe rain has pushed you to look for indoor fun, some of these overlooked Magic Kingdom attractions at Walt Disney World will provide unexpected amusement. 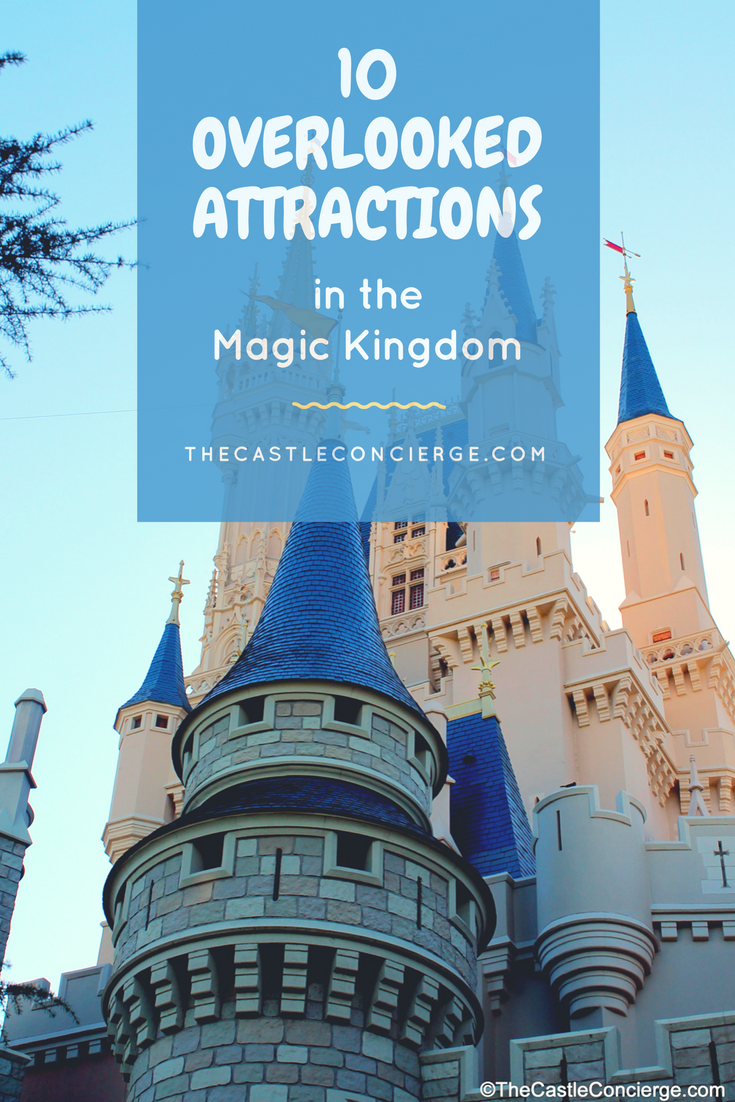 Let’s take a closer look at Ten Lesser Known Attractions to include in your next Magic Kingdom visit(s). These quintessential pastimes are great for the whole family.

It takes 20 minutes to do a full circuit on the Walt Disney World Railroad. Or you can alight from the train at any of the stations — Main Street, U.S.A., Fantasyland, and Frontierland. Take some time off your feet and enjoy one of Walt Disney’s favorite pastimes. During one visit, our son was chosen to be a guest conductor aboard the WDW Railroad; it’s still a favorite memory.

Okay, there are 116 stairs to climb at this Adventureland attraction. Unfortunately, folks with ambulatory issues will have to sit this one out. If you are able to make the climb, you’ll be rewarded with beautiful vistas and charming rooms nestled within the Robinson Family’s treehouse home. My favorite room is the library. 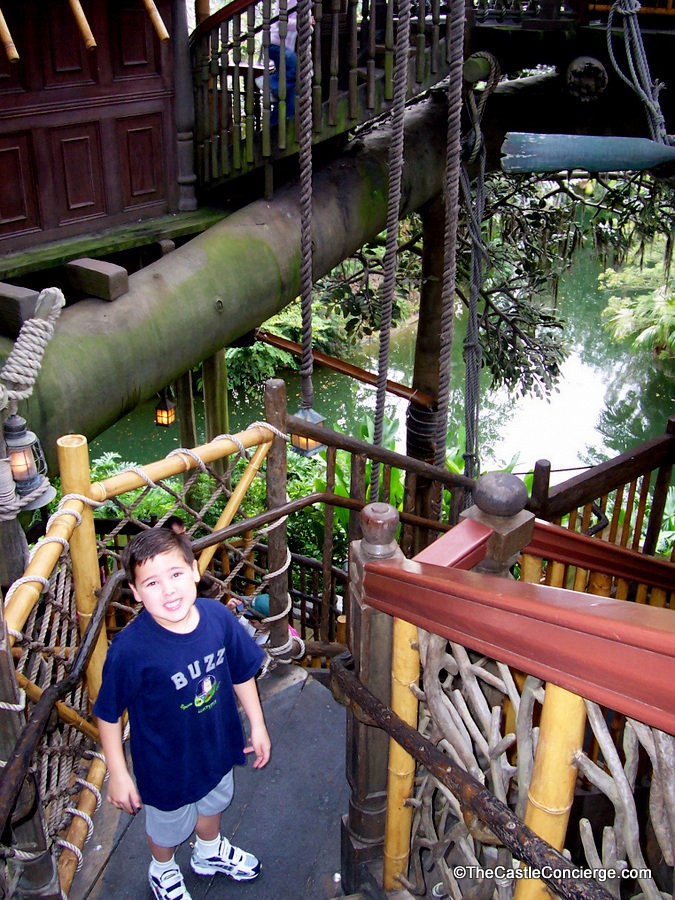 Climbing the Swiss Family Treehouse is a fun adventure!

While tech-savvy kids may find this attraction dated, remind them that this is one of the attractions that Walt Disney helped create. Grizzly Hall is home to 18 bears proud of their hillbilly songs. Warning: You may find yourself singing and clapping. Reminder: You don’t know anybody so have some knee-slapping fun. I love watching the talking heads — Melvin, Buff, and Max. 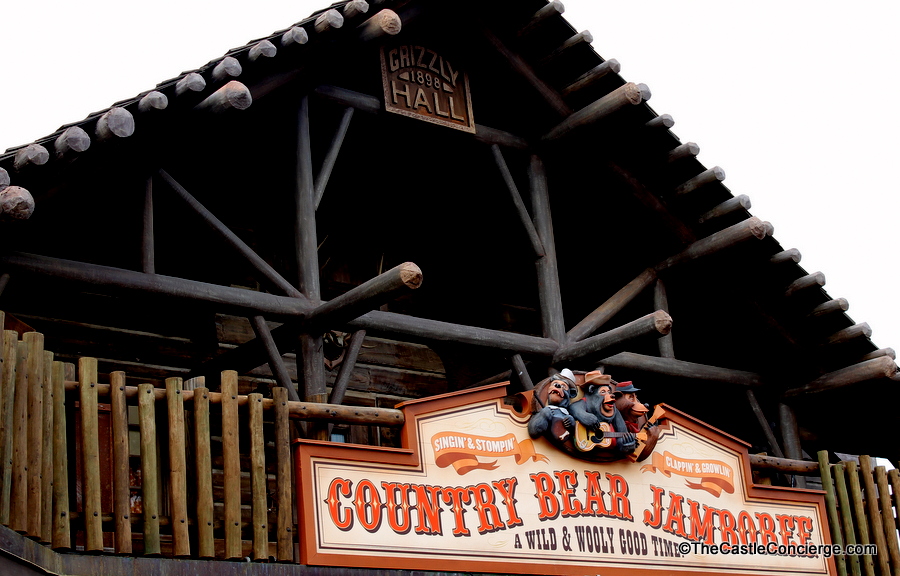 A wild and wooly good time!

As your log raft crosses the Rivers of America, you’ll leave even more of the real world behind. Go ahead and wander; Walt Disney made sure this island was full of exciting nooks and crannies to explore. I love the meandering paths and sitting for a spell (in the shade!) at Aunt Polly’s Dockside Inn. 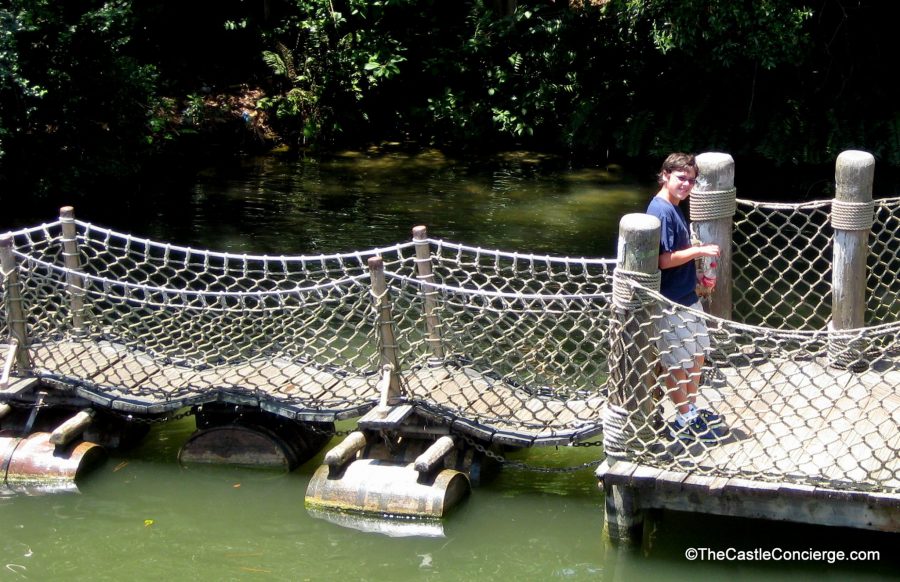 Our son enjoying a snack on Tom Sawyer Island. Fun for all ages!

Embark on the Liberty Belle’s 17-minute, half-mile cruise around Tom Sawyer Island. Watch the river’s edge for unexpected scenes or sit back (note that seating is limited) and rest your park-weary feet. Visit the Salon on the Promenade deck to see historical photos and maps. You’ll also find padded benches in this interior area. 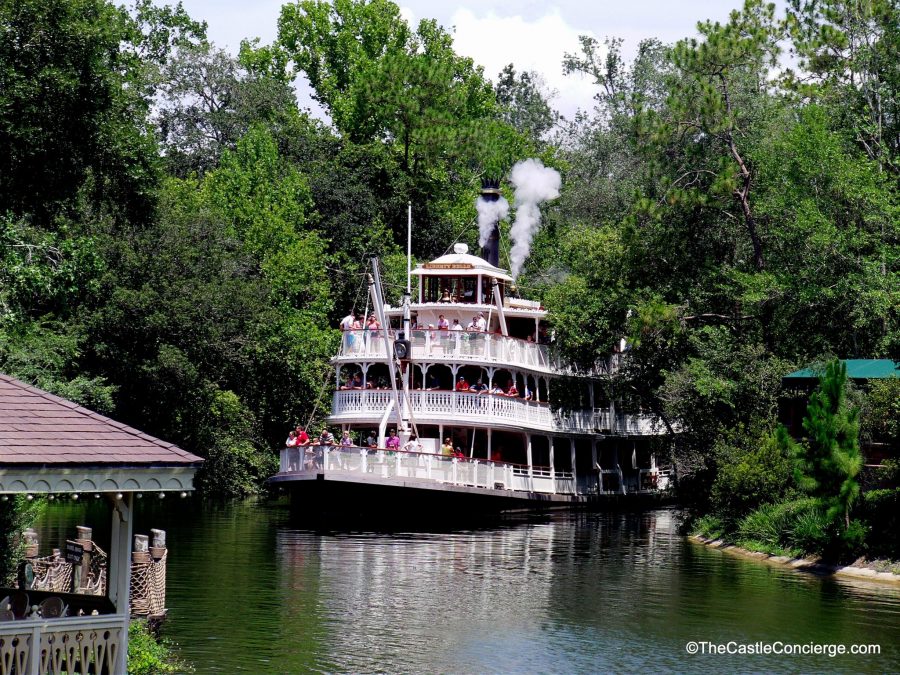 Cruise aboard the Liberty Belle

The Hall of Presidents

This stirring, patriotic presentation inside a replica of Philadelphia’s Independence Hall offers a respite from rain, Florida humidity, and tired feet. If you or a traveling companion needs a rest, head to The Hall of Presidents. Here’s two options: you can enjoy the time to relax and enjoy a presentation on American History OR take a 23-minute nap. I’ve done both many times. 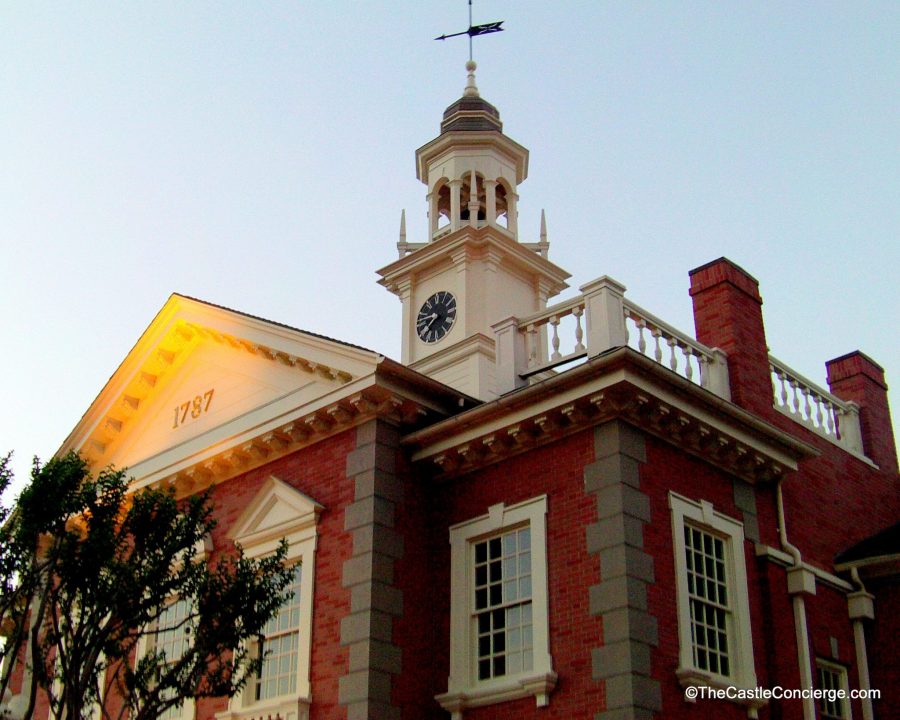 Hall of Presidents is a replica of Independence Hall in Philadelphia.

Don’t miss the roll call with the U.S. Presidents that follows the film. It’s a genius showcase of audio-animatronics.

A Walt Disney classic, “it’s a small world” showcases children from around the world. And yes, they sing this special little ditty during the entire voyage. 😉 The colorful collages created by Mary Blair delight visitors of all ages. Some people love it; some hate it. Confession: I’m a fan of the boat ride, costumes, Mary Blair artwork, and… the song. 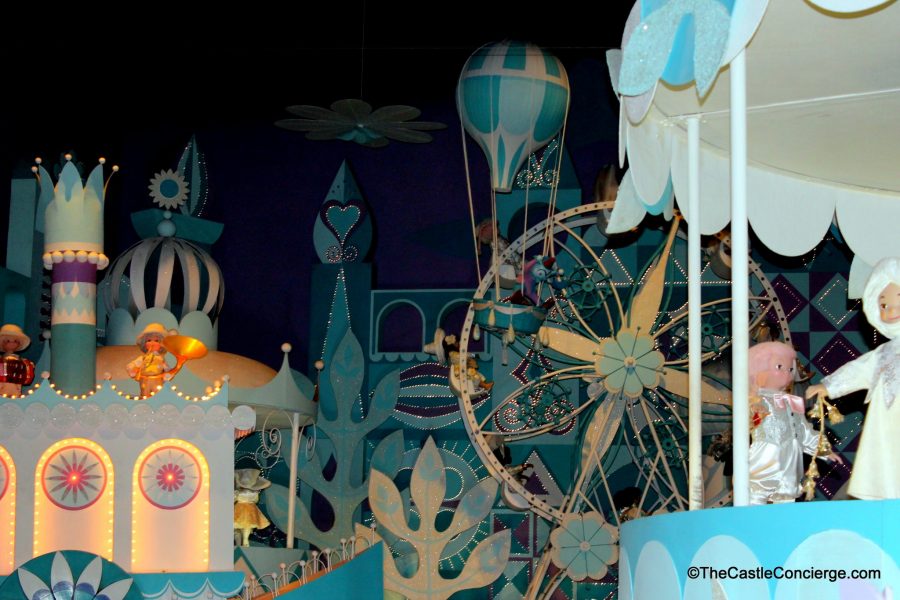 Cruise through “it’s a small world”

Don your “opera glasses” to join Donald Duck and Mickey Mouse on a 3D musical adventure. Since I can’t hold a tune, I try to quietly sing along to my favorite Disney songs. 😉 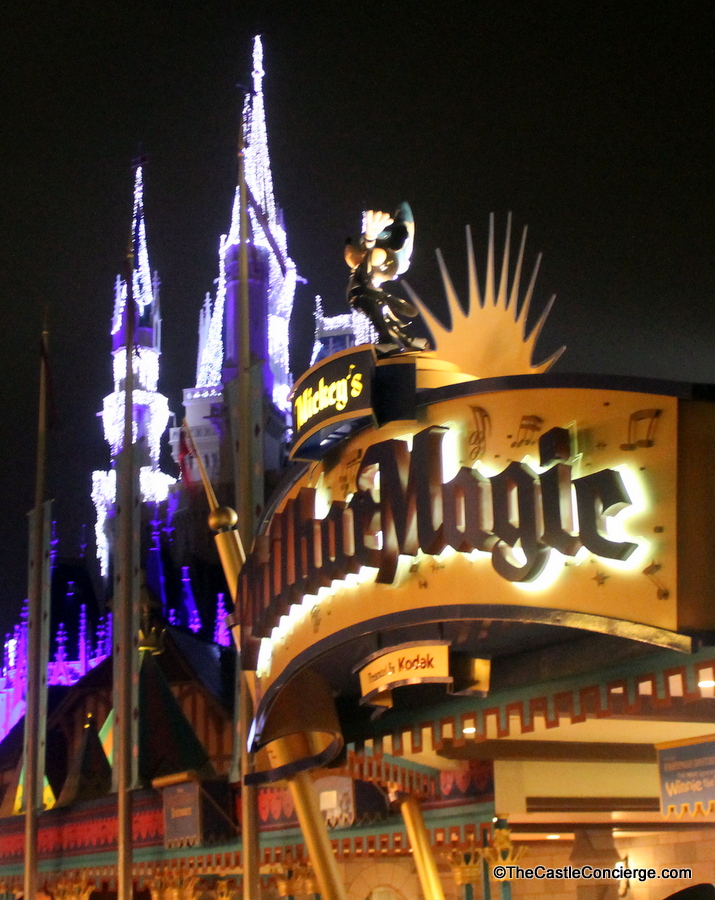 Join Mickey and Donald Duck in this 3D musical adventure.

Another piece of Disney history! Carousel of Progress was developed for the 1964-65 New York World’s Fair by Walt Disney. Sit back in the revolving theater and watch the four nostalgic acts of the show presented by audio-animatronics. This 17-minute presentation will have you singing “There’s a Great Big Beautiful Tomorrow.” It’s been one of my all-time favorite Magic Kingdom attractions since my first trip at age 11. 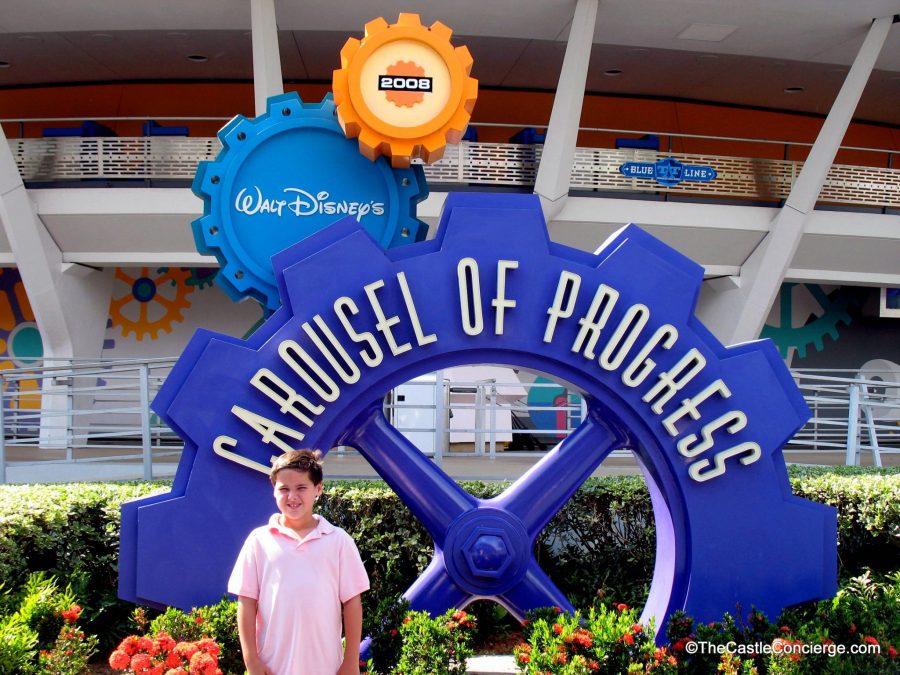 Carousel of Progress is a family favorite!

In a narrated ten-minute journey, you’ll get a relaxing tour of Tomorrowland as you weave in and out of the futuristic buildings. We’ve seen Space Mountain with the lights on a few times during rides on the Tomorrowland Transit Authority. Wow! And of course, I love to hear one of my favorite quotes — “Paging Mr. Morrow. Mr. Tom Morrow“.

Of course, you can’t see and do everything on a visit, however I would highly recommend including at least one of these ten underrated Magic Kingdom attractions in your itinerary. Show some love to the classics! After you conquer the most popular rides, what attractions in the Magic Kingdom does your family recommend?

I remember when my grandson was chosen to be guest conductor. You could see him bursting with pride. The smile on his face was priceless. What a wonderful memory.

His life was all about trains then so it was the perfect magical moment! 🙂

French Toast. A great way to start our first full

This website uses cookies to improve your experience while you navigate through the website. Out of these, the cookies that are categorized as necessary are stored on your browser as they are essential for the working of basic functionalities of the website. We also use third-party cookies that help us analyze and understand how you use this website. These cookies will be stored in your browser only with your consent. You also have the option to opt-out of these cookies. But opting out of some of these cookies may affect your browsing experience.
Necessary Always Enabled
Necessary cookies are absolutely essential for the website to function properly. This category only includes cookies that ensures basic functionalities and security features of the website. These cookies do not store any personal information.
Non-necessary
Any cookies that may not be particularly necessary for the website to function and is used specifically to collect user personal data via analytics, ads, other embedded contents are termed as non-necessary cookies. It is mandatory to procure user consent prior to running these cookies on your website.
SAVE & ACCEPT
2
0
Would love your thoughts, please comment.x
()
x
| Reply