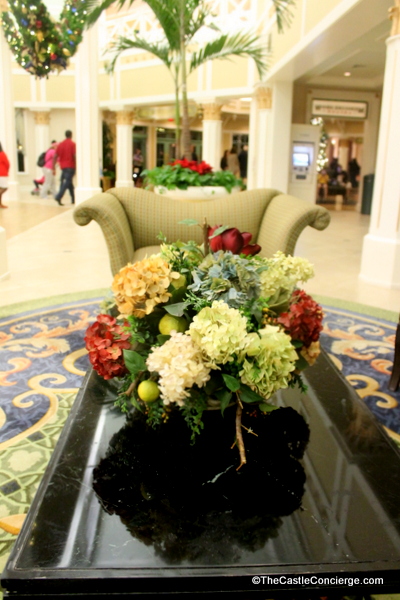 Only a few short days until New Year’s Eve, and I’m already exhausted from the seemingly never-ending holiday preparations. Additionally, I am struggling with keeping my immune system from crashing given that everyone around me (including my wife!) has been or is getting sick. It generally isn’t Christmas for me unless I have some sort of upper respiratory ailment. 😉

This time of year, however, does provide me with an opportunity to reflect upon something I am going to term as the Holiday Aesthetic at the Disney Parks. Having experienced a dozen or so excursions to WDW during the holiday season, including one at Disneyland, I am keenly aware that the look and feel of the parks and resorts is strikingly different from November through early January. Aesthetic as a noun indicates the presence of a set of principles governing the idea of beauty at a given time and place or underlying and guiding the work of a particular artist.

Aesthetic as an adjective apparently can refer to the study of the mind and emotions as they are related to a sense of beauty or the appreciation of beauty.

From my perspective, the Disney Holiday Aesthetic can and should be inclusive of both definitions. There can be no doubt that from their inception in the 1950’s, every design detail related to Disney Parks and Resorts around the globe has been planned from a specific set of principles. Those initial principles are very clearly Walt’s. It might be debated as to how much of those principles remain as the Disney company has moved past the millennium, but that is a topic for another day. The specifics of the look and feel of the Disney Parks and Resorts has been studied and extensively written about in various mediums for decades. Frequently, these musings make mention of individual perceptions and emotions as they relate to the appreciation of architectural design and seasonal decor. I am a Behavior Analyst and concerned with human behavior that is objective as well as measurable. For this reason, The Holiday Aesthetic of WDW for me is difficult to operationalize. However, I am keenly aware that it is something tangible that has always affected me in a visceral manner. Enjoy a holiday meal at Biergarten

Here are a few more visually represented quintessential examples of the Disney Holiday Aesthetic from my perspective. Now you can save on MVMCP Tickets: Save $7 on Mickey’s Very Merry Christmas Party ticket!

What are your favorite holiday decorations at the WDW Parks and Resorts?

So beautiful – we really want to visit during the holidays!

Definitely worth doing! The visit doesn’t even have to be centered around Thanksgiving, Christmas, or New Years either. Most of the resort is completely decorated by Veterans Day in early November and remains up until after Marathon Weekend in January.

This website uses cookies to improve your experience while you navigate through the website. Out of these, the cookies that are categorized as necessary are stored on your browser as they are essential for the working of basic functionalities of the website. We also use third-party cookies that help us analyze and understand how you use this website. These cookies will be stored in your browser only with your consent. You also have the option to opt-out of these cookies. But opting out of some of these cookies may affect your browsing experience.
Necessary Always Enabled
Necessary cookies are absolutely essential for the website to function properly. This category only includes cookies that ensures basic functionalities and security features of the website. These cookies do not store any personal information.
Non-necessary
Any cookies that may not be particularly necessary for the website to function and is used specifically to collect user personal data via analytics, ads, other embedded contents are termed as non-necessary cookies. It is mandatory to procure user consent prior to running these cookies on your website.
SAVE & ACCEPT
2
0
Would love your thoughts, please comment.x
()
x
| Reply