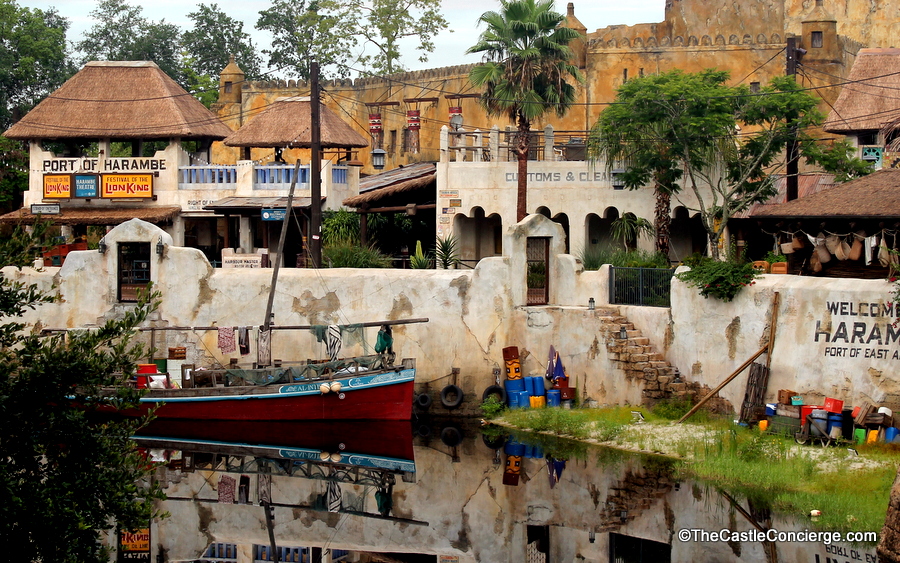 Disney’s Animal Kingdom (DAK) far surpasses the other three Walt Disney World (WDW) parks when it comes to its ability to immerse guests into the various experiences and stories that the Imagineers carefully craft. Joe Rohde’s theme park is an extraordinary achievement. Since opening in April 1998, DAK has been providing guests of all ages with multiple layers of sensory and emotional stimuli. The lighting, landscaping, architecture, graphics, and color palette are all layered in overwhelming detail.

The level of immersion and designed detail at Disney’s Animal Kingdom is unique at WDW. The only other park on Florida’s Disney property that comes close is Typhoon Lagoon. (Love that place, but for a variety of reasons, including temperature, water parks are not necessarily on my touring plan every time I visit Disney. 😉) Astounding details are woven into the landscaping near Expedition Everest.

My first visit to Disney’s Animal Kingdom occurred in January 1999, less than one year after its opening. From that excursion and onward, this park has continuously held a special place in my overall Disney experience. Although there are many criticisms leveled at DAK, some legitimate and others ridiculous (in my opinion), there is no other Disney Park in the United States that offers the range of emotional impact related to its explicitly detailed design and execution. The Entrance and Reveal at Disney’s Animal Kingdom

The experience begins at the entrance, not unlike many of the other Disney parks, however, Disney’s Animal Kingdom sets itself apart in significant ways. The necessity to walk through the Oasis to get to the Tree of Life and the remaining themed areas of DAK, works magic every time it is experienced.

The fact that you cannot see any details of the park beyond the foliage and paths of the Oasis as you enter the turnstiles is unique for the parks at WDW. With Epcot and Disney’s Hollywood Studios, there is no effort or any mechanism by which any aspect of the entrance to the park is a mystery. Spaceship Earth cannot be hidden. Hollywood Boulevard and several of the other themed areas at the Studios can be plainly seen even before you enter the turnstile. Meandering pathway through the Oasis

The Magic Kingdom and the carefully designed reveal of Cinderella’s Castle is closer to what Disney’s Animal Kingdom presents. Cinderella Castle, by design, is slowly experienced as you pass under the Walt Disney Railroad Station and turn the bend into the central hub at City Hall or the Exposition Center. Look at the details in every corner of Disney’s Animal Kingdom!

It is a well-known fact in Disney lore that the slow reveal to Cinderella’s Castle is copied directly from Disneyland’s reveal of Sleeping Beauty Castle. Walt and his Imagineers designed the entrance to Disneyland as the overture to “the show” and a direct analogy of entering a movie theater or theatrical production. The turnstile, the archway into the lobby (City Hall area), the popcorn available immediately upon entering the “lobby” at either side, and Main Street USA rolled out as the red carpet towards the main attraction, Sleeping Beauty Castle and the Hub. The adventures of the themed lands lie beyond. This purposeful manipulation of these stimuli attracts and compels guests forward to explore. All roads lead to amazing scenery

Disney’s Animal Kingdom is analogous to the Magic Kingdom only in that its entranceway was carefully designed to manipulate your senses and have a distinctive emotional impact on your experience. The care by which the entrance to DAK is designed is carried throughout every remaining inch of the park. Beyond anything else, this is what I admire most about the Animal Kingdom. Stop and take in the splendid views in the Oasis.

The Story Revealed by Joe Rohde

The other, and perhaps more significant, analogy that can be drawn between the Magic Kingdom/Disneyland and DAK is that each owes its existence to the dreams of one man. Joe Rohde is unquestionably Walt Disney’s stand-in for Disney’s Animal Kingdom. Walt’s passion to tell stories and provide the guest with adventure, education, and immersive experiences by careful design of every single detail of Disneyland is well documented. It can be clearly seen that Joe Rohde’s passion has always and continues to achieve the same with DAK.

Kim saw firsthand the exquisite detail that went into the Wild Africa Trek when she took part in the opening day ceremony in January 2011 with Joe Rohde in attendance (yes, I’m still jealous!). The Work of Art

Over the years, I have spent many hours slowly soaking up and appreciating various details of the work of art called the Animal Kingdom. Frustratingly, I know that I have only barely scratched the surface. During any of my trips to WDW, a must do is simply wandering and admiring small chunks of Disney’s Animal Kingdom. Along the Maharajah Jungle Trek, you’ll wander the ruins of an ancient palace

Joe Rohde and the Imagineers have continued to plus the park with every addition or modification made since 1998. The masterful use of aesthetics continues to astound me: Anandapur and the addition of Expedition Everest, the expansion of Harambe, and several of the modifications made to Discovery Island are just a few of these examples. The details present in the Asia section of Disney’s Animal Kingdom bring life to the mythical kingdom of Anandapur.

Animal Kingdom’s extraordinary use of design, story immersion, and details is encouraging when considering near and future development in the park. Some of the most salient aesthetics at DAK for me include: the ingenious use of graphic design apparent in the signage across the entire park, the wall and brickwork found within Asia, the mountaineering props and gear spread all over Anandapur, the queues for Expedition Everest and Dinosaur, the Restaurantosaurus, the entrance to Harambe, and the entire park at nighttime.

DAK at night is especially wonderful to walk AND run through! Yes, Kim and I ran the Expedition Everest Challenge 5K back in 2008 and 2009! As it was purposely designed to be, DAK’s aesthetics and artful design cannot be described well with words. Photographs do a better job, but there truly is nothing like being able to touch Disney’s Animal Kingdom in person. I am looking forward to my next visit! Share your thoughts on Disney’s Animal Kingdom in the comments below. Do you have an upcoming trip planned?