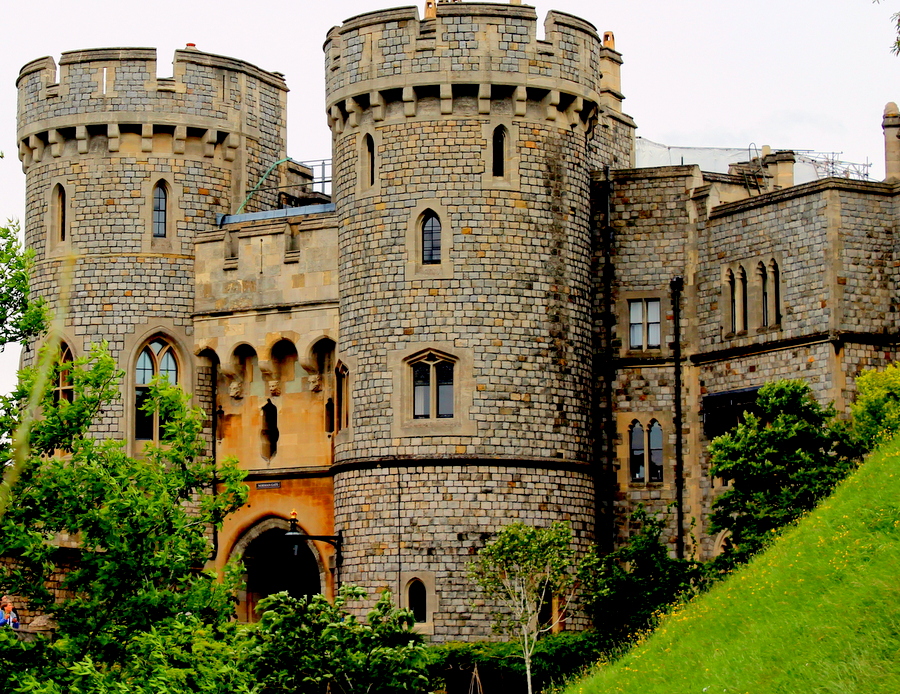 Favorite London Palaces and Castles that You Should Tour

I absolutely love castles;they make my heart swoon. And I was thrilled when a trip to London provided a wonderful opportunity to theme our vacation around London palaces and castles. Fairy tales, English folklore, and even Disney cartoons inspire us to admire these magnificent structures. While we dream of turrets and romantic ballrooms, castles were typically built as fortified structures. Yet, palaces were often grand but not fortified. No matter how you define them, these buildings are fascinating to visit and should be included in your London-based travel plans, especially if any of these sites are on your travel bucket list.

Of course the royal residences of the United Kingdom’s sovereigns are well known. Located within London and with 775 rooms, Buckingham Palace is not only a home to Queen Elizabeth II and Prince Philip but also the center of national celebrations.

Don’t forget to see if the Royal Standard is flying above Buckingham Palace. If it is, the Queen is home!

When the Royal Standard flag is flying, the Queen is home!

We wished we were the lucky occupants of this car getting to travel inside the gates!

To see the inside of this palatial building, plan a visit well in advance for the summer months and for select tours during December, January, and Easter. Unfortunately, we visited in late May when the Palace was still closed to visitors. I figure, it’s a good excuse for a return trip, right?!

Since our hotel was within walking distance of Buckingham Palace, we were able to take a stroll there on our first night in London. It was a perfect beginning to an incredible London vacation!

Tip: Before setting off to tour London, get a London Pass.

Designed by Christopher Wren, Kensington Palace sits on the western edge of London and is the current home to the Duke and Duchess of Cambridge.

Many people will recognize Kensington Palace as it was home to the late Diana, Princess of Wales.

Our London Pass included entry to Kensington Palace so we toured during an afternoon including a stroll through some of Kensington Gardens.

Big Ben is the focal point of Elizabeth Tower and part of the stunning Gothic architecture of the Palace of Westminster. Housing Parliament, the palace is situated on the north bank of the River Thames.

Palace of Westminster with Big Ben

I was in awe every time we got a glimpse of Big Ben while touring London. Of course, getting to hear the bells chime was also memorable.

The Tower of London

Steeped in history, this historic castle houses the Crown Jewels. However, the Tower of London is equally notable for the famous prisoners like Anne Boleyn, Catherine Howard, and Thomas More that were kept (and some beheaded) here.

Included in the London Pass, the Tower of London is a must visit for any history buffs. As such, it gets quite crowded so arrive early in the day before the tour buses roll in.

As a principal residence of Henry VIII, Hampton Court Palace is filled with Royal history. We arrived before opening and were able to explore the palace with no wait.

From Henry VIII’s kitchens to the Great Hall, touring Hampton Court Palace was a highlight of our trip.

Since we visited on a rainy day, we chose not to explore the garden maze but if you are there on a pleasant day you may want to extend your tour. We hear it’s extremely fun!

As a royal residence, Windsor Castle hosts throngs of visitors. So plan ahead, take the hour-long train ride from London to Windsor, and arrive early in the morning.

As this is a favorite residence of the Queen, I also recommend checking the website to make sure the castle will be open on your preferred touring day.

To enhance your London vacation options, stay tuned to The Castle Concierge for more in-depth reviews.

If you are looking for a fun outing and are lucky enough to live within driving distance of a castle, plan a day trip or weekend exploration. If you are planning to travel to an area that is known for castles, be sure to include at least one in your touring plans.

Want help with your own castle-inspired destination? Email me at kim.lapaglia@mei-travel.com for a no-obligation, free quote.

What is your favorite London Palace or Castle? Share your thoughts in the comments below or drop us an email.